Indiana has more Carnegie Libraries than any other state

Carnegie, of course, made his fortune in steel in the latter part of the 19th century.  As he grew older, he had a desire to start giving back.  His goal, he said, was "the improvement of mankind."  By the time he died in 1919, he had given away more than 90 percent of his wealth.  His money went to install 7000 church organs across the nation and to create the Carnegie Hero Fund, the Carnegie Institutes, and the Foundation for the Advancement of Teaching.

Libraries, though, were his passion.  "It was from my own early experience," Carnegie said, "that I decided there was no use to which money could be applied so productive of good to girls and boys who have good within them and ability and ambition to develop it as the founding of a public library."

For about thirty years beginning in 1890, Andrew Carnegie provided funds for 1,679 public libraries in towns and cities around the United States.  Another 830 were built in other parts of the world.

Ladies' book clubs, school groups, and civic organizations joined forces across America to apply for Carnegie funds.  Communities were required to provide a suitable tract of land and establish a tax that would generate funds for maintenance of the building once it was constructed.

Hoosiers jumped on the bandwagon.  With 164 applications granted, more Carnegie libraries were built in Indiana than in any other state.

The first application accepted was for the town of  Goshen in 1901.  The Goshen library opened in 1903.   Crawfordsville owns the distinction of actually completing the first Carnegie library in 1902.

The last ones were built in Lowell and North Vernon in 1918.  During that 15-year span, thousands of Hoosiers were introduced to their own neighborhood libraries.  No fee was to be charged for a library card, and Carnegie insisted that books be placed on open shelves so that readers could browse on their own.

Carnegie libraries were sturdy buildings of brick, limestone, and marble, designed by leading architects.  They were built in a variety of  styles, including Italian Renaissance, Spanish Colonial, Beaux-Arts and Classical Revival.

The capital city of Indianapolis received the most grants from Carnegie.  Of the five Carnegie libraries built in Indianapolis, two have been demolished and one is a community center.  The other two are still happily serving as libraries.  The one on East Washington Street has two gnomes perched high above the front door.  One has an open book on his lap while the other has a closed book and is peering down on those who pass through the doors.  These mysterious sprites have been greeting library visitors for over a century.

The Spades Park Library on the near northeast side of the capital city is still a vital part of its community.  Built in Italian style with oriental brick and terra cotta, the red tile roof has sheltered books and readers since 1912.

A recent survey revealed that, of the 164 Carnegie libraries built in Indiana, 145 are still standing.  Approximately 98 of them are still serving their communities as libraries.  The others are serving as city halls, museums, community centers, small businesses, and private residences.

There is hardly a county in Indiana that does not have a Carnegie library building.  In many cases, the stately structure is still serving as a library and center of learning.  Computers now sit on library tables and reading is on video screens as well as printed pages, but the vision of Andrew Carnegie is still being served.

"A library outranks any other one thing a community can do to benefit its people," he said.  "It is a never failing spring in the desert." 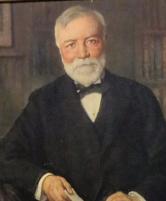 ​Andrew Carnegie was not a Hoosier.  He was born in Scotland and lived his life in eastern states.  However, the steel magnate left a lasting impression on Indiana.  164 impressions, to be exact.  That's how many public libraries Carnegie gave to the Hoosier State.