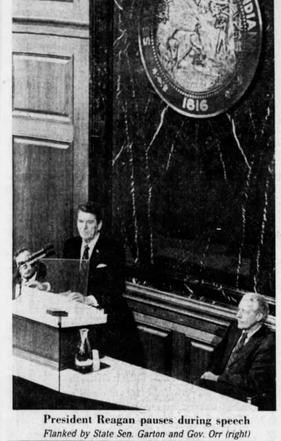 Presidential Visits to the Indiana Statehouse

A not-uncommon question on Indiana Statehouse tours is:  Has a President ever been here?

The answer is “yes, but not many.”

The fact is that Presidents, or people running for President, are on a mission when they come to Indiana.  They are either campaigning to get into office or campaigning for a special project for which they seek public support.  In either case, they want to talk to big crowds of people.  They won’t find those big crowds inside the Statehouse.  They will find them at Tomlinson Hall (in past years,) on the Circle, at the Fairgrounds, at the Convention Center, or any location that will contain a good-sized crowd.

Here is a list of visits to the Indiana Statehouse by United States Presidents (or Presidents-to-Be.)  This should be not considered the final word on the subject.   It is quite possible that other Presidents have been inside the Statehouse when the press was not watching.

June 22, 1819:  This would be a double-header in a way.  James Monroe, the current President, was a guest in Corydon of Governor Jonathan Jennings.  With him was Andrew Jackson, who would become President ten years later.  We know they had dinner at the Jennings home.  Did they go into the nearby Statehouse?  History is not clear.  At any rate, when you consider the difficulties of traveling into the “frontier” in 1819, this Presidential visit was something very special.

June 11, 1842   Martin Van Buren was a former President, having left office the year before.  Traveling through the “western states,” he visited the Statehouse (the old one) in Indianapolis and met with Governor Samuel Bigger.  Legend has it, that as he traveled farther west on the National Road, his carriage was purposely overturned and he was tossed into the mud.  A plaque marks the spot in Plainfield.  It seems that the locals were not happy with his veto of a bill to improve the road.

February 11-12. 1861:  It is well-documented that Abraham Lincoln stopped in Indianapolis on his way to take the oath of office.  He got off the train on West Washington Street just west of the old Statehouse.  His carriage passed in front of the Statehouse on the way to the Bates House Hotel.  He gave a speech from the balcony of the hotel.  The next morning, he had breakfast with Governor Olive P. Morton in the Governor’s home on West Market.  It was thought that that Lincoln had planned to walk on over to the Statehouse.  Did he do it?  Probably not.  From what we can gather, the train was waiting.  His wife Mary and his two boys, Willie and Tad, had arrived to help celebrate his 52nd birthday, and they were ready to go.  Of course, Lincoln lay in state in the rotunda of the old Statehouse on April 30, 1865.

October 1, 1887:  President Grover Cleveland and his wife Frances visited the new Statehouse.  This was a major visit by a President.  Cleveland made a speech to a large crowd gathered in front of a stand on the south side of the building.  He took note of the new structure.  “I am told that your spacious and handsome State House, just completed, was actually built within the limits of the expense originally fixed. . . it is a thing so unusual that you may be well proud of it.”  The Presidential party was ushered into the Governor’s office by Governor Isaac Gray.  Later they were treated to a reception in the rotunda.  See the photo of newspaper art below.

​Grover Cleveland’s 1887 visit to the Indiana Statehouse.  This newspaper art shows him in the rotunda.

1850s – 1901:  Benjamin Harrison served as Supreme Court Reporter, so he undoubtedly spent a great deal of time in the old Statehouse in the 1850s until 1862 when he left for the Civil War.  Later, as a United States Senator in the 1880s and as President from 1889 to 1893, he had more than one occasion to visit the current Statehouse.  For example, as a U. S. Senator he was part of the reception that met President Cleveland in the Statehouse in 1887.  We know from newspaper reports that Harrison was the subject of a crowded reception at the Statehouse when he returned home from the White House on March 6, 1893.  After the Presidency, from 1893 until his death in 1901, it is presumed that he might have walked into the Statehouse as a private citizen to visit friends or conduct business. Of course, when he lay in state in the rotunda on March 16, 1901.

October 3, 1912     Woodrow Wilson, Governor of New Jersey, was in Indianapolis on a campaign which eventually put him in the White House.  After a long day of speech-making, he came to the Statehouse a little after 10:00 that night.  He had made a promise to view displays created by students at Emmerich Manual Training High School.  He saw exhibits on all three floors and shook hands with all the students.  In the House of Representatives, he witnessed a demonstration of appliances used in mine rescue work.  In the rotunda he went into every room of a “model house.”  In the kitchen of the model house, he sat down and shared biscuits made by the students.

March 21, 1960     John F. Kennedy came into the Statehouse to file his candidacy papers with the Secretary of State.  After filing, he went upstairs to a podium in front of the chamber of the House of Representatives.  He spoke to reporters about the controversy surrounding the fact that he was a Roman Catholic.  He had been greeted outside the Statehouse by picketers.  He said, “I believe in the First Amendment which provides for the separation of the church and the state.  I also believe in Article VI, which says there shall be no religious test for qualification for public office.”

February 9, 1982     President Ronald Reagan addressed a joint session of the Indiana Legislature from the podium at the front of the House of Representatives.  He had come to the state to promote his “New Federalism” program, which would have the states assuming some of the control previously held by the federal government.  Streets around the Statehouse were closed several hours prior to his 2:30 arrival.  Secret Service and FBI agents had “swept” all four floors of the building.  The third and fourth floors were off limits to everyone, including state employees.  Curtains were placed in the halls of the top two floors so that the President’s coming and going could not be seen.  The doors at the lower west entrance were removed so that the Presidential Limousine could drive straight into the building.  His visit lasted about 30 minutes.  A plaque in the House Chamber commemorates his speech there.