Abe Martin was created by Indiana journalist, cartoonist, and humorist Kin Hubbard.  Hubbard was on the staff of The Indianapolis News for many years.  His character Abe Martin was a cracker-barrel philosopher who hung around the small town of Nashville in southern Indiana.   Abe appeared every day in the News.   Hubbard sketched him sitting on a rail or leaning on a post.  With each sketch would come a piece of hometown logic, satire, witty thought, or, as Abe would say "hoss sense and nonsense."  The Abe sketches were syndicated and thousands of newspaper readers followed Abe's philosophy from day to day.  Hubbard gained national recognition.  Will Rogers called him "America's greatest humorist."  Old Abe continued his daily quips until Hubbard's death in 1930.  Even after that, the News continued to offer daily repeats of Abe Martin for decades more.

Celery should be seen and not heard

Some fellas don't care what they say, and neither does anybody else

Now and then an innocent man is sent to the legislature

Boys will be boys, and so will a lot of middle-aged men

Nothing will dispel enthusiasm like a small admission fee

Fun is like life insurance; the older you get, the more it costs

When a feller says, "It hain't th' money but th' principle of the thing," it's the money

Experience is a dear teacher, but he delivers th' goods

Hardly anybuddy would work fer what ther worth

Th' feller that says, "I may be wrong, but. . ." does not believe ther kin be any such possibility

To err is human, but to admit it ain't

Peace has its victories no less than, war but it doesn't have as many monuments

​A friend that ain't in need is a friend indeed

Laugh and the world laughs with you, weep an' it keeps on laughin'

Distant relatives are the best kind, and the further the better

He who hesitates is honked at

You kin lead a feller to the polls, but you can't make him think

Who recalls when folks used to git along without somethin' if it cost too much?

Bees are not as busy as we think they are.  They just can't buzz any slower

​We don't have to peddle a good thing

If you want to git rid of somebody, jest tell 'em somethin' for their own good 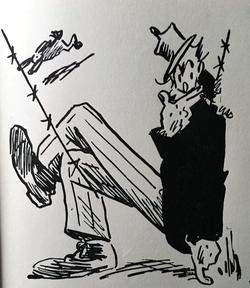