"Who's Buried in Grant's Tomb?"

That old riddle is the name of a book by C-SPAN's Brian Lamb, who takes his readers on a tour of the 39 presidential grave sites.

Perhaps there should be a book about the final resting sites of former Indiana governors.  It might be called "Who's the Hoosier buried in Brooklyn?"​ 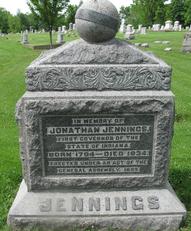 Yes, there is an Indiana governor buried in Brooklyn, New York.  It is Joseph A. Wright, the state's 10th chief executive.  His career took him not only to the statehouse, but to both the U.S. House and Senate in Washington.  Later in life he was minister to Prussia.  His grave is in Brooklyn because his wife's family was there when he died in 1867.

A total of 49 men have served as Indiana governor.  A little clarification is needed here.  Eric Holcomb is usually referred to as the state's 51th governor, which is true with respect to the number of gubernatorial terms in the state's over 200-year history.  However, two governors served non-consecutive terms.  Therefore, they are counted twice.  Just for the record, they are Isaac Gray, buried in Union City, Indiana, and Henry Schricker, whose grave is in Knox, Indiana.

Of the 45 governors who are deceased, only three besides Wright are buried outside the state.   Ratliff Boon, who served in Corydon as the state's second governor, later moved to Missouri, where he was buried in 1844.

James Brown Ray was the first governor to serve in the brand new capital of Indianapolis.  In later years he moved to Cincinnati where his tombstone can be found at the huge Spring Grove Cemetery.

Paul V. McNutt, one of two governors born in Franklin, is another whose career took him to faraway places.  When he left the Statehouse in 1937, he was appointed Ambassador to the Philippines.  Upon his death in 1955, his family chose Arlington National Cemetery for his final resting place.

The other governor from Franklin, Roger Branigin, did not wander too far from home.  When he left office in 1969, he resumed his Lafayette law practice.  When he died six years later, he was buried in Franklin's Greenlawn Cemetery.

Interestingly, one-fourth of all Indiana chief executives are buried in the same cemetery.  Eleven of them are at Crown Hill on the northwest side of Indianapolis.  They range from Noah Noble, elected in 1830, to Robert D. Orr, who served two terms in the 1980s

The remaining governors are buried in or near their hometowns.  For example, the state's first governor, Jonathan Jennings, is in Charlestown on the Ohio River.  Paris Dunning is at Rose Hill Cemetery in Bloomington, Ashbel P. Willard is resting near his home in New Albany, and Ralph Gates is buried in Columbia City where he practiced law for many years.

Monuments run the gamut in size.  No Indiana governor has anything resembling Grant's tomb, but a couple have impressive mausoleums.   One of the largest is at Crown Hill for Thomas Marshall, governor from 1909  to 1913 and Vice-President under Woodrow Wilson.

Some have tall obelisks like the one for James D. Williams near Monroe City.  Alvin Hovey has an imposing monument in Mt. Vernon with his likeness captured in bronze.  At Crown Hill the bust of Civil War Governor Oliver P. Morton sits atop the stone pedestal marking his grave.

However, quite a number of the markers are surprisingly modest.  George Craig, J. Frank Hanly, Matthew Welsh, and Harold Handley all have small stones nearly flush to the ground.

The wording on the majority of tombstones is spare, giving just names and dates.  Most make mention of the deceased's gubernatorial past, but not all.  A few are embellished with a torch and spray of stars to symbolize the state flag.

Governor Frank O'Bannon died in office in 2003 with about a year to go in his second term.  His grave is in his beloved hometown of Corydon, marked by a monument of Indiana limestone.  The words of George Bernard Shaw are engraved on the stone, and they likely express the feelings of all the men who have served as governor of the Hoosier State:

Life is no brief candle for me.  It is a sort of splendid torch which I have got hold of for the moment, and I want to make it burn as brightly as possible before handing it on to future generations.