Three Hoosiers Meet on the Way to Greatness

Go To Previous Page
Go Back To Home Page 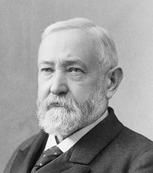 “What this country really needs is a good five-cent cigar.”

With this quip, Thomas Marshall gained immortality in “Bartlett’s Familiar Quotations.”              Of course, there was much more to Marshall than the few words he muttered during a dull day in the United States Senate.  An attorney from Columbia City, he was governor of Indiana from 1909 to 1913.  From the Statehouse he moved to Washington to serve two terms as Vice-President of the United States under Woodrow Wilson.

What makes history fun are the serendipitous events often playfully employed by fate.  A classic example involves Marshall, Benjamin Harrison, and Lew Wallace, Hoosiers all, whose lives intersected many years before any of them gained fame on the national stage.

It was 1873 and Thomas Marshall was attending Wabash College, working as staff member on the “Geyser,” the school newspaper.

It seems that a female temperance lecturer was invited to be a guest at the college.  However, her visit abruptly ended not long after her arrival.  Young Marshall, an enterprising reporter, looked into the matter and soon presented a fascinating story to his “Geyser” readers.

“She was caught tramping on the feet of the boys boarding at her house and was immediately kicked out,” he wrote.  “We have nothing to say, however, as she gave us the worth of our money in her entertainments.”

The lady in question quickly filed a charge of libel.  She sued the newspaper staff for damages of $20,000.  Serious about her case, she set out to hire the best attorney she could find.  She did not have to look far. Residing in Crawfordsville was General Lew Wallace, famed Civil War leader, prominent attorney, and budding novelist.  He took the case.

Marshall and the other staff members were genuinely frightened.  The young men of the “Geyser” staff appointed Marshall to plead their case to another Civil War General, Benjamin Harrison in Indianapolis.  They knew that Harrison and Wallace were friends.  As a matter of fact, Harrison had once partnered in law with Lew’s brother, William.

Marshall made his way to Indianapolis and soon found himself in the General’s law office.  He showed him the article and asked if it was libelous.

Harrison read the newspaper clipping carefully.  He then looked up and said, “Young man, if I had an enemy that I wanted to libel and could hire you to look after the job, I would hunt no further.”

General Harrison probably felt sorry for the frightened young men and agreed to take the case.  The details of subsequent legal maneuvering are not on the record, but chances are that Harrison convinced Wallace that there was enough truth in the story to embarrass his client.  The plaintiff soon dropped the charges.

After the matter was cleared up, Marshall met with Harrison and asked him what was owed in the matter of legal fees.  Marshall recalled the General’s answer:  “I wouldn’t think of taking anything from you.  You have been foolish boys and this will be a great lesson to you.  Never hereafter in life charge anybody with wrongdoing or crime that you do not have in your hands undoubted proof that it is true before you make the charge, and even then don’t make it unless you are quite satisfied that by making of it you are either defending yourself or performing some real public service.”

Time marched on.  Lew Wallace gained fame as the writer of popular novels, including the classic “Ben Hur," published in 1880.  Benjamin Harrison rose to prominence in the Republican Party, serving as a United States Senator from 1881 – 1887 and moving into the White House in 1889.    Twenty-five years later, Marshall went to Washington, too, to serve two terms as Vice-President.

In his memoirs, Marshall had nothing but kind words for the twenty-third President.  Speaking of Harrison's kindly assistance in the libel episode, he wrote “This convinced me, as I thought of it later, that all the talk of the cold-blooded nature of President Harrison was false and unfounded.  The general was too busy thinking, reasoning, seeking the right, to be a light-hearted man such as I am, but when in full and profitable practice he could waste four or five days on a bunch of foolish college boys, seeking to save them from the punishment of their folly.  Whatever anyone else may think of the President, I think his heart beat true to all the finer and nobler instincts of our nature.”

As for the lesson learned, Marshall said, “I have never again been sued for either slander or libel.”

And with that, he probably lit up a good cigar.

Go To Next Page 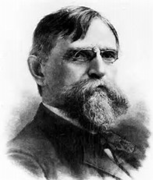 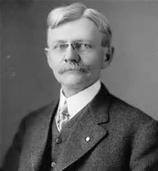